Tommy Hume’s story is common in Maine and across the country. And it’s inspiring.

After spending—or wasting, as Tommy puts it—13 years of his life dealing with his addiction and spending time in jail and prison, Tommy joined Paul White Company in 2017, and while eager to keep busy with his new job, he found himself again struggling with addiction. So, he entered a rehabilitation program in California. When he returned to Maine, he had a renewed purpose and decided to take his life as well as his career seriously, then his journey started in the right direction.

Since returning to the team, Tommy has excelled in his trade and is quickly advancing, even leading an extremely tough project at a new facility for Mercy Hospital in Portland during the COVID-19 pandemic. This would not have been possible for Tommy without his new commitment to his journey. For the last few years, he has displayed a passion to learn the trade, to be a leader in company-wide safety efforts, and to deliver exceptional service for our residential customers and commercial partners

Now two years sober, Tommy manages a sober home in Portland while he continues to share his story. He often talks about Paul White Company family as a big reason he’s been able to stay clean these last two years. And it’s his story that motivated us to partner with the Scars Foundation to support mental health awareness.

Coming Together and Showing Support

Recently, we worked with a designer at 320 Ink in Westbrook, Maine, to create a personal T-shirt for our staff. If someone sees the shirt and asks about it, it will increase awareness of the cause, the Scars Foundation and the company, so it’s a win-win. In addition, we made a monetary donation.

“We want these shirts to be visible, and we want them to promote positive mental health in our workplace and community. We are a team, and when people need help, we look for ways to help. The shirts promote the cause but and our team approach,” says Jonathan White, president of Paul White Company.

Mental health is not often talked about in commercial construction, but because of the COVID-19 pandemic and the struggles so many people are having both mentally and physically, it just makes sense to make mental health part of the everyday discussion at Paul White Company.

The partnership with the Scars Foundation was an effort to use the resources and publicity of a national foundation as well as connect with Godsmack’s music, a well-known band, within the company. With the status of the two, it brings energy to our message and to our team that this is an issue our company takes serious enough to talk about openly, as well as help to find resources to help our team.

The Scars Foundation, based in Beverly Hills, California, was founded by Sully Erna and Godsmack, to help raise awareness of the mental health issues so many people are facing today. White is close friends with Robbie Merrill, the bassist and a founding member of the band, and since the foundation’s beginnings, White noticed some of our staff could have used the mental health support the organization provides.

“It was important we made an effort, alongside the Scars Foundation, to empower individuals through music, independence, long-term education, tools and resources and emotional support,” Jonathan says, particularly given the demands of the work being done at Paul White Company. 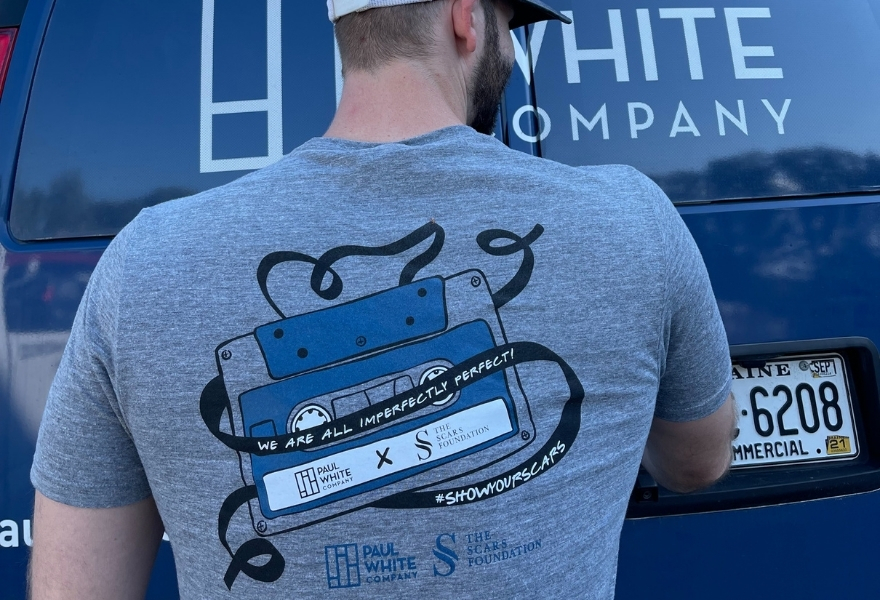 We have more than 150 commercial and retail flooring installers, project planners, warehouse workers, accountants and designers. In recognition of their efforts, each year, we listen to team members and give them things like health and wellness resources, financial support, personal growth assistance as well as other programs to help them succeed not only at work but in their personal and family lives.

“We’re all perfectly imperfect,” Jonathan says. “And we’ve all asked for a second chance from someone in our lives. It’s important that we shared with our staff that asking for a second chance is okay, and we’ll be there for them when they’re ready.”

Tommy has been given a second chance these last few years, and he’s making the most of the opportunity. White says when he thinks of second chances, he thinks of a person admitting fault, finding help and trying to do better.

“We’re honored to employ Tommy and others on that crucial journey to finding their better self,” Jonathan says.

For more information on the Scars Foundation, visit scarsfoundation.org

To donate directly to the Scars Foundation, click here: thescarsfoundation.networkforgood.com