Soapstone 101 the Most Misunderstood Stone

History of Soapstone Around the World

In the 18th century archaeologists found evidence of soapstone being used by the Colonial Settlers for counters, sinks and bed warmers. Soapstone was used heavily along the east coast where artifacts of cookware date back to 2,000 BC. Native Americans were known making cooking stones. They would place soapstone pieces into a fire until they were scorching hot, then place them in stew to heat it through. The Native Americans also began to create pieces of art with the stone and would use it to trade with the settlers in Canada and the United States. 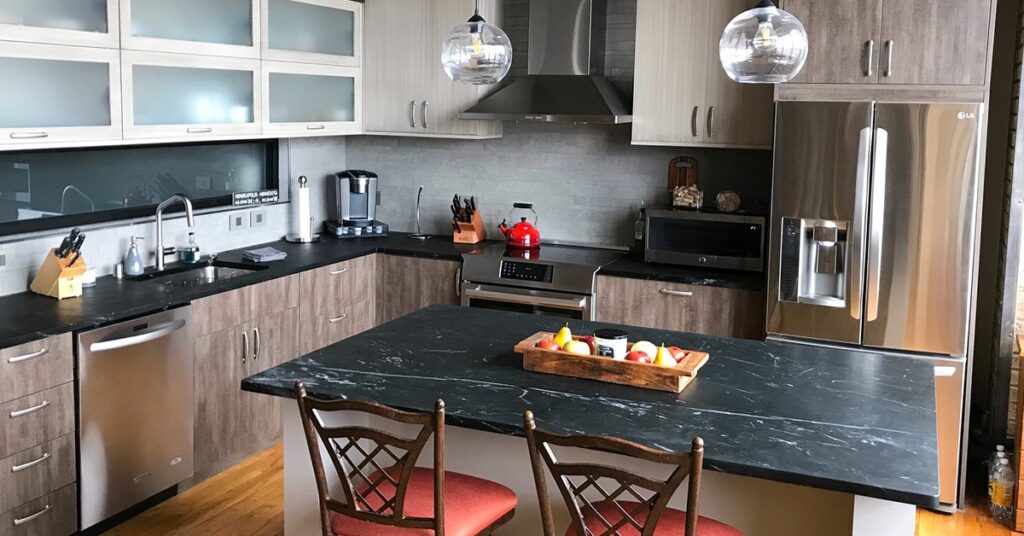 Around the world, Scandinavia had a history of using Soapstone for tools, vessels and sculptures. The Vikings were also known for their utilization of Soapstone for cooking and jewelry. It was the Middle Ages however where soapstone was used in common architecture. During the 12th century, India made entire buildings out of soapstone, China used soapstone to create seals in lieu of signing documents and there have been discoveries of soapstone throughout Zimbabwe, Iran and Crete. However, today most of the world’s Soapstone is quarried and exported from Brazil.

Soapstone has beauty that is truly timeless

Soapstone’s technical Latin name is Steatite; it is metamorphic rock that is composed of 70% talac, which makes it rich in magnesium, and it is mixed with other minerals. But what does metamorphic exactly mean? It means that a rock changed from one form to another under intense heat and pressure.

Soapstone is soft and prone to scratching, but is easy and inexpensive to repair. With these three steps

To buff: reapply dry wax and your stone is like new. It is the only stone you can restore to purchase condition from your own home!

Want To See If Soapstone is Right For You?

You can see samples of soapstone and more at our Stone Shop at 444 Riverside Industrial Parkway in Portland! Call ahead at (207) 797-4657 to set up an in-person or virtual meeting with our experts!